As the distance between you and the sea shrinks, two things become overwhelmingly obvious. The smell and the crunch. You see, it's not sand beneath your feet. It's decades of death.


Macerated bones from millions of dead fish create the illusion of white sand beaches.
The 'rotten egg' smell is a combination of dead fish, algal bloom and hydrogen sulfide created by the decaying organic matter trapped beneath the water. 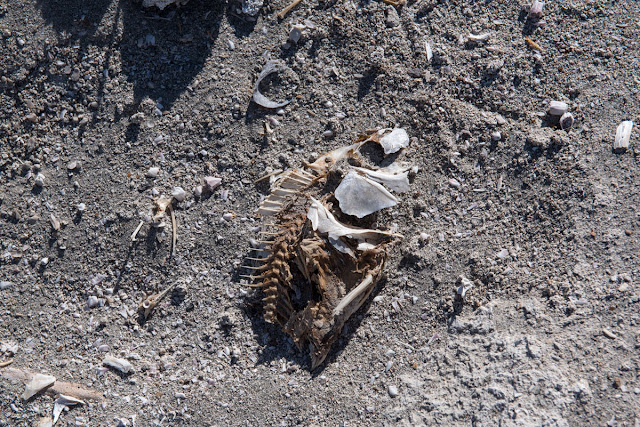 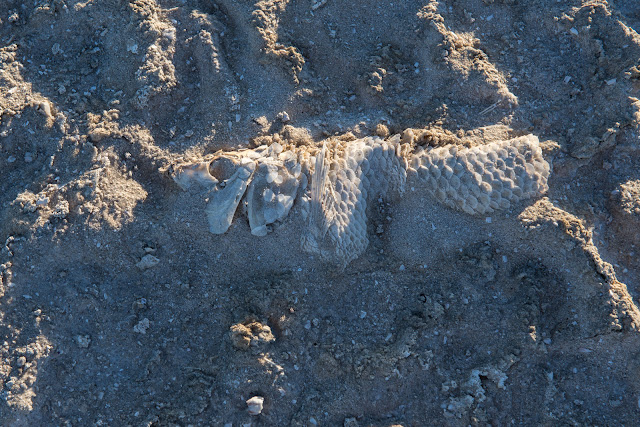 One of the biggest concerns today is fine-particle air pollution caused as the waters recede, revealing more of the sea's bottom. With higher and higher summer temperatures, evaporation is increasing, plus less water is entering the sea from surrounding farmlands. With nothing flowing back in, it is only a matter of time before miles more sea bottom is exposed and that's not a good thing. The town of Indio already has some of the countries worst particle air pollution. 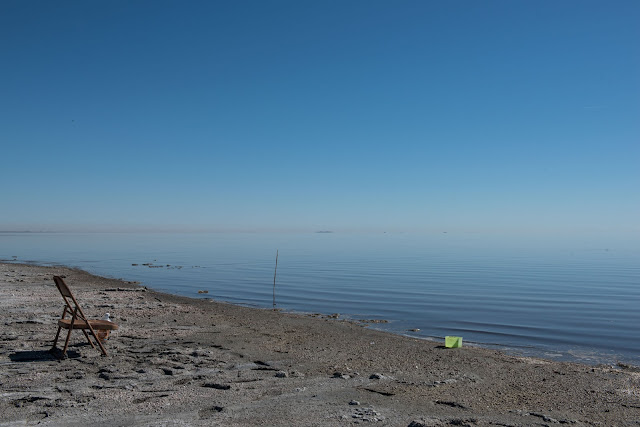 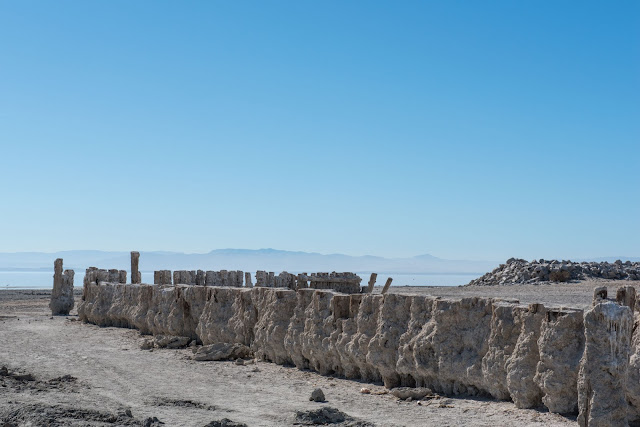 One report states that the sea mud contains arsenic, selenium and pesticides, including DDT - some of the most toxic in the world. Millions of Californians are at risk of respiratory illness. Crops will be damaged. Wildlife will be harmed. Tourism will suffer even more.
But it wasn't always like this.
California's largest lake was a mistake.
In 1905 an irrigation canal inlet gate on the Colorado River failed and flooded much of the area and the Salton Sea was born. By the 1920s it was a major tourist destination and in 1929 over 2,000 people lined the shore as five world speedboat records were set. The salinity makes boats more buoyant. 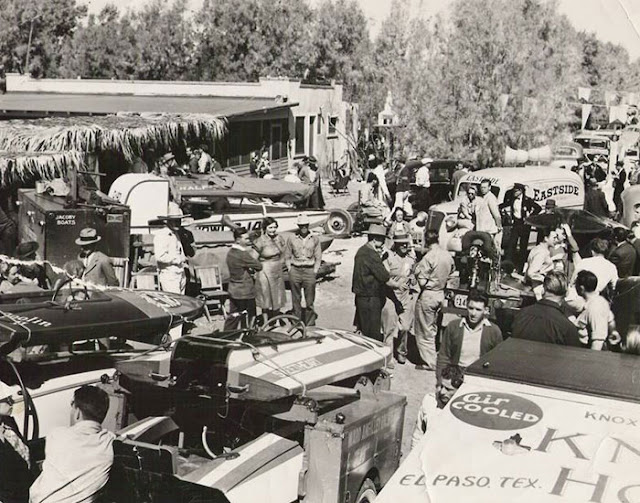 The main purpose of the lake was to irrigate crops in the Imperial Valley but tourism boomed for decades. In the 1950s the Salton Sea was a bigger draw than Yosemite. Sports fishing increased when freshwater fish were replaced with saltwater ones (corvina, cargo, croaker). The North Shore Beach and Yacht Club opened, and the 'Salton Riviera' rivaled nearby Palm Springs, drawing the likes of Frank Sinatra, Bing Crosby, Beach Boys, Jerry Lewis, Marx Brothers and Desi Arnaz. 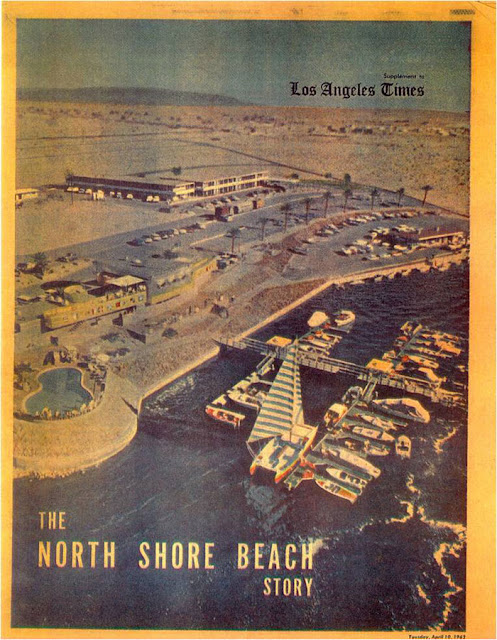 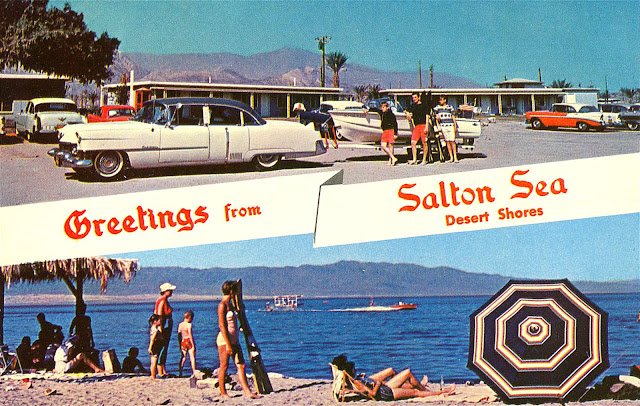 Also in the '50s, developer Penn Phillips bought and sold thousands of acres on the lake's western shores, but 1960 started the beginning of the end. He abandoned Salton City, leaving behind a few homes, sewers and street signs that named paved roads that checkered empty neighborhoods. 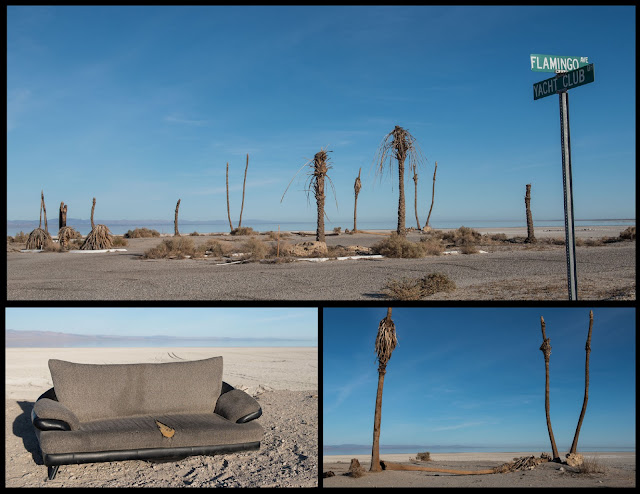 If the 50s and 60s were unkind, the 70s were downright cruel.
The rising sea elevation led to buildings being abandoned, including the city's marina. With no outlet, less and less rainfall and more pesticide-laden drainage spilling in from surrounding farmland, the pollution increased drastically, as did the salinity level.
If that wasn't enough, 1976 produced Hurricane Kathleen and 1977 Hurricane Doreen, destroying marinas and resorts and pushing the economic decline downward even further.
Today tourists still trickle in, mostly in awe of what once was. 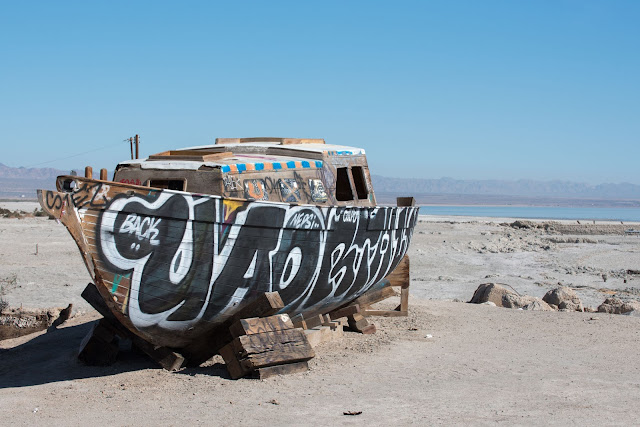 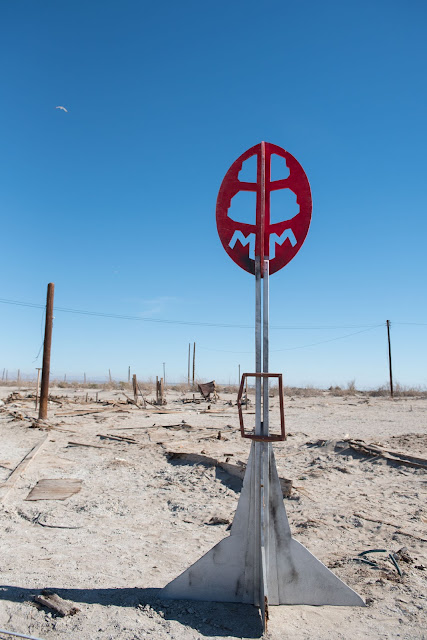 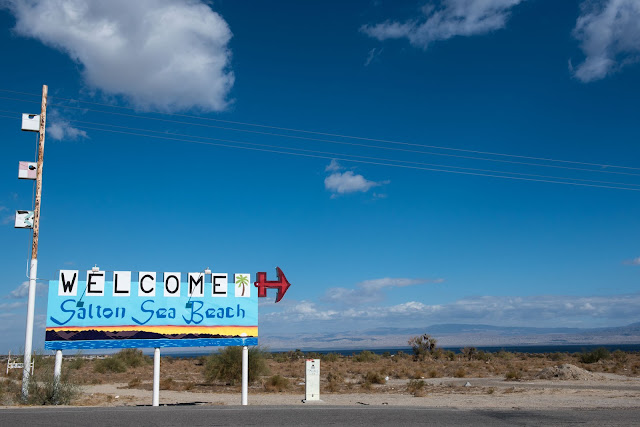 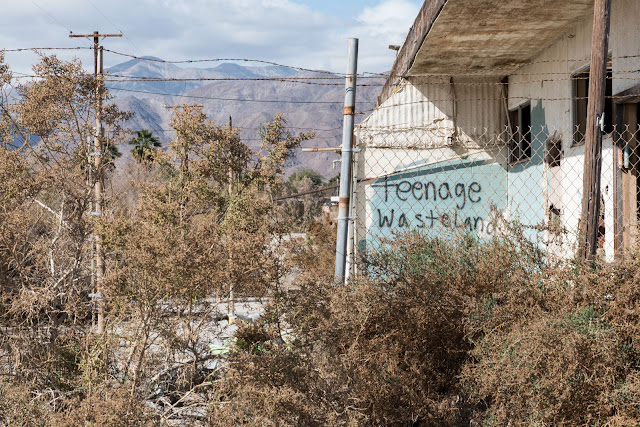 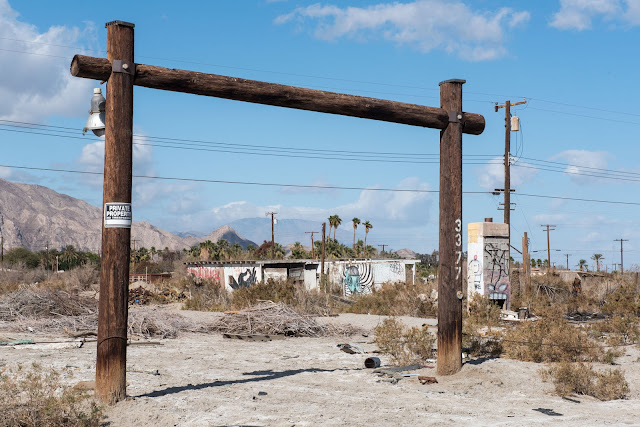 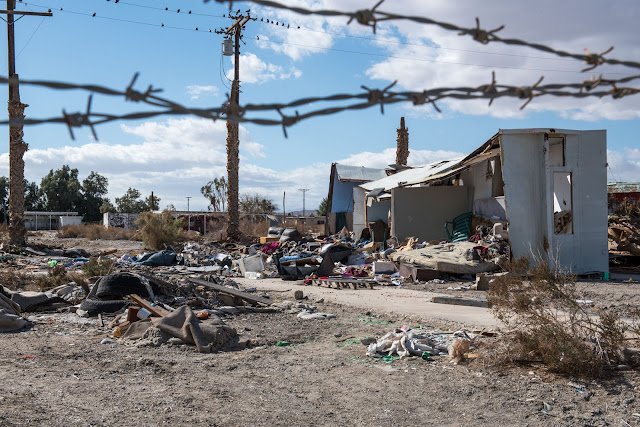 Fishing was restricted in 1986 because of toxicity levels in the fish, but has been replaced with things like paramotoring and hot air ballooning. 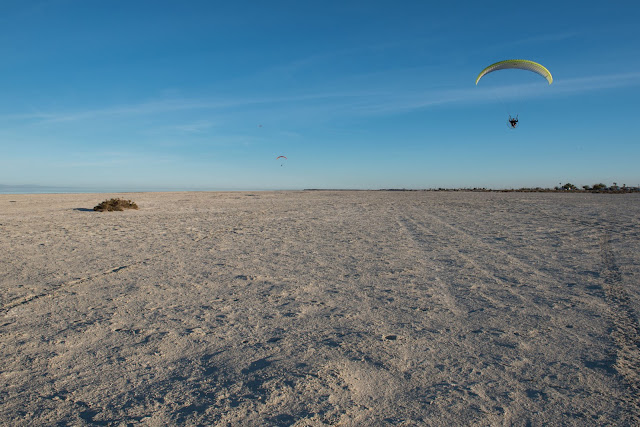 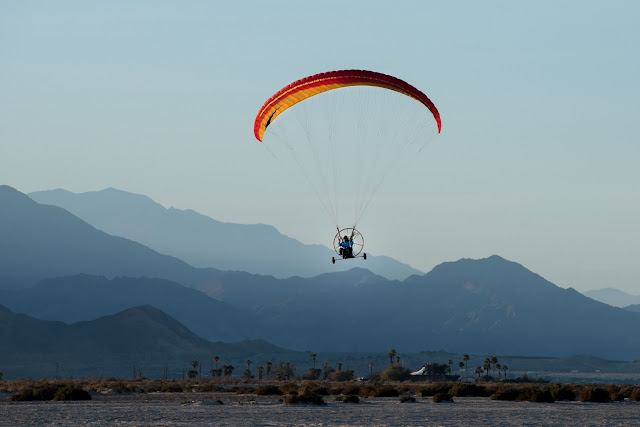 Photographers still creep in and wander the deserted shores and dilapidated towns searching for signs of better times. 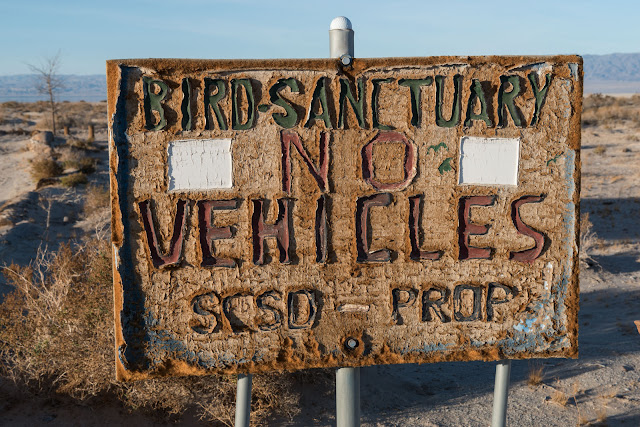 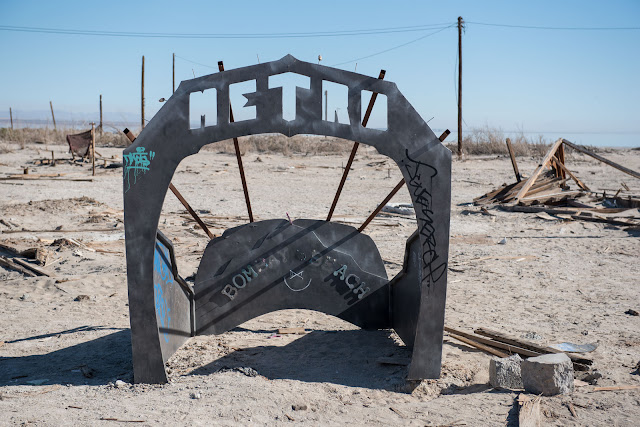 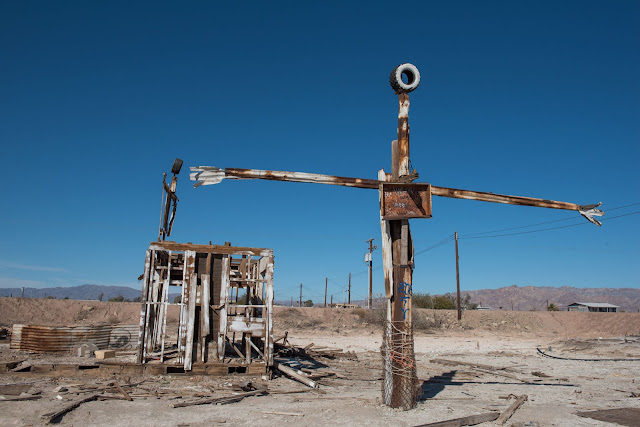 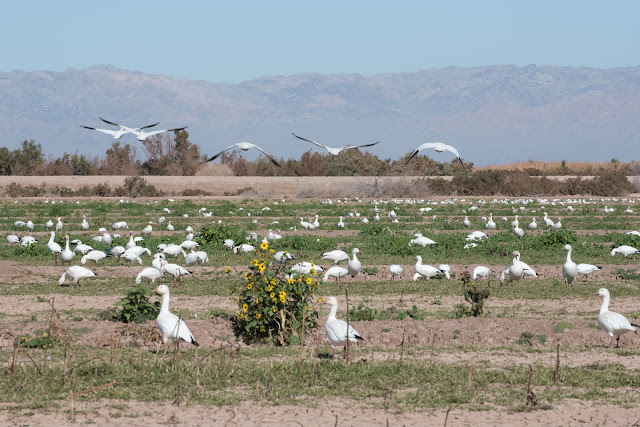 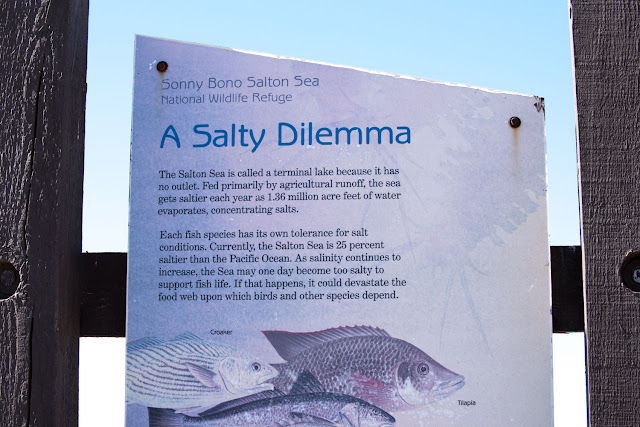 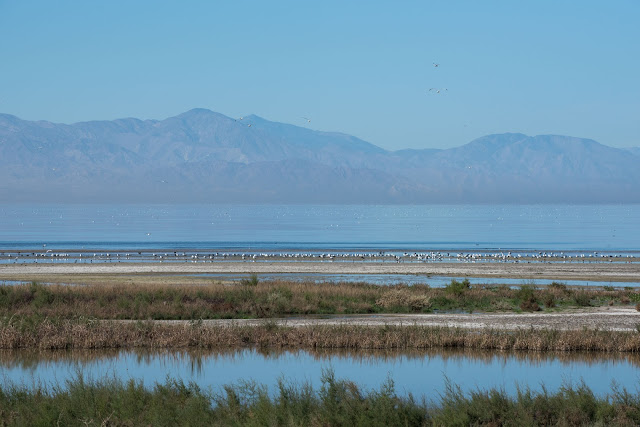 In 2015 a task force was formed and is working on a 10-year plan to improve air quality, wildlife habitat and water quality. I, for one, wish them well.
It's an eerie, cheerless, depressing, smelly, creepy, beautiful, humble, historic place. Here's to new beginnings. 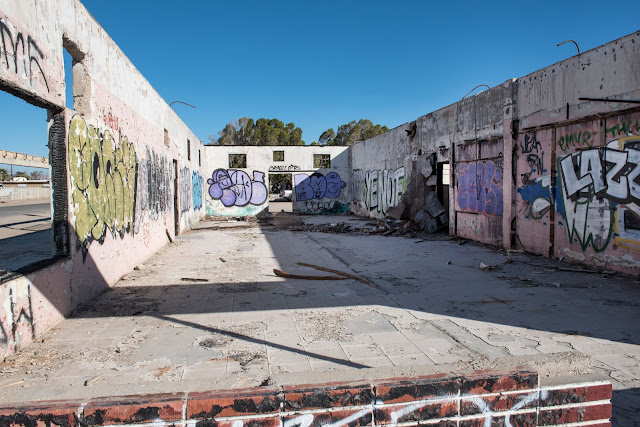 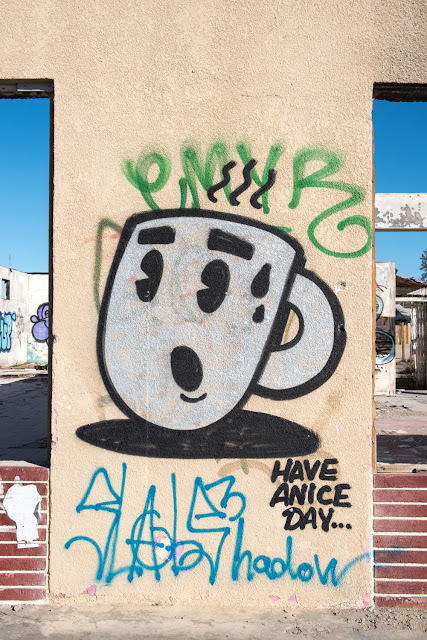 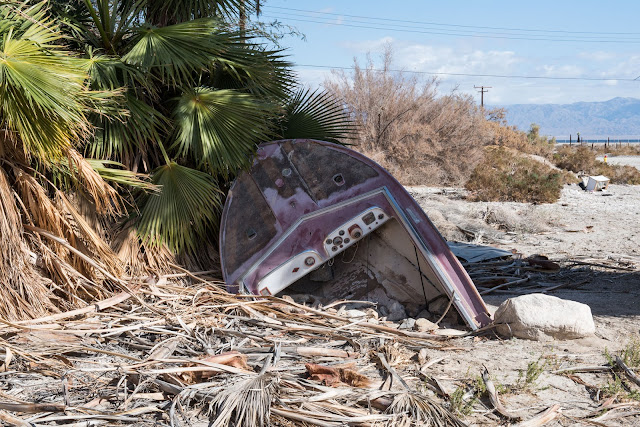